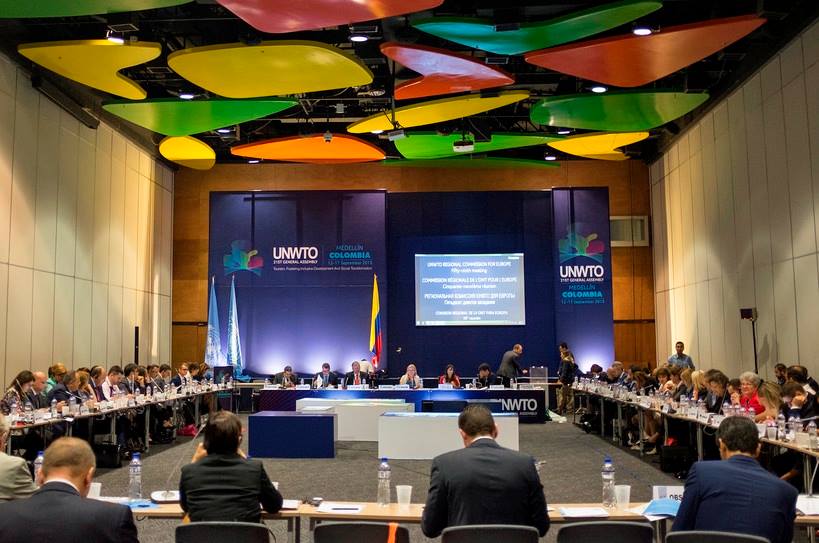 On September 12-17, 2015 the city of Medellin, Colombia hosted the 21st session of UNWTO General Assembly. The aforementioned Assembly was attended by delegations from 120 countries. During the event the Georgian side was represented by the Georgian National Tourism Administration and the Ambassador of Georgia to Spain H.E. Zurab Pololikashvili.

Within the framework of the UNWTO Commission on Europe, Georgia was re-elected to the Committee on Statistics and Tourism Satellite Accounts, extending its mandate until 2020. Membership of the Committee is especially important for implementation of up-to-date methodologies for analyzing tourism statistics. Herewith, Georgia was also selected as the location to host the aforementioned Committee’s next meeting, this is the first time that such a meeting will take place outside UNWTO headquarters – in Madrid, Spain.

Furthermore, with the joint initiative, Costa Rica and Georgia presented a proposal to the UNWTO Gastronomy Network to hold the organization’s first Wine Forum and high-level meeting. The aforementioned event is scheduled to be organized in 2016, with Georgia being named as the host country.

During the Assembly Georgia was repetitively prized for its support of the development of  the Silk Road’s tourism potential.

Within the framework of the General Assembly the Georgian Delegation held meetings with representatives of various countries, as well as high-ranking officials of UNWTO. Herewith, the Head of the Delegation paid a courtesy call on the President of Colombia H.E. Juan Manuel Santos,  the Minister of Commerce, Industry and Tourism of Colombia,  and the Mayor of Medellin. Herewith, the delegation held bilateral meetings with the representatives of Portugal, Austria, Romania, Slovakia, Costa-Rica, Saudi Arabia and etc. Furthermore, the Delegation participated in forums and events related to development of tourism, which were held in parallel to the Assembly.