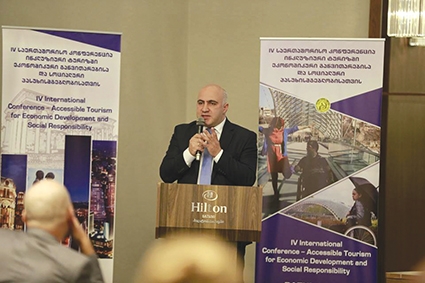 Accessible tourism for economic development and social responsibility was the main topic of the fourth international conference held in Batumi last week.

Organized by the center of accessible tourism, Parsa, and the European Network for Accessible Tourism (ENAT), it aimed at sharing existing international experience in creating an adapted and inclusive environment according to international standards in the sphere.

Giorgi Chogovadze, Head of the Georgian National Tourism Administration (GNTA), introduced the projects that were already considered as successully implemented, giving an example of Mtskheta, the former ancient capital of Georgia and one of the most popular touristic destinations in the country, now fully tailoring to the needs of people with disabilities. As Chogovadze noted, Tskhaltubo- a balneological resort in Georgia, is next on the list, with trainings for private sector representatives now being regularly organized.

“Tours throughout the country are also being planned and, in cooperation with Sighnaghi, Kvareli and Telavi Municipalities, packages for accessible tourism are already set,” Chogovadze said.