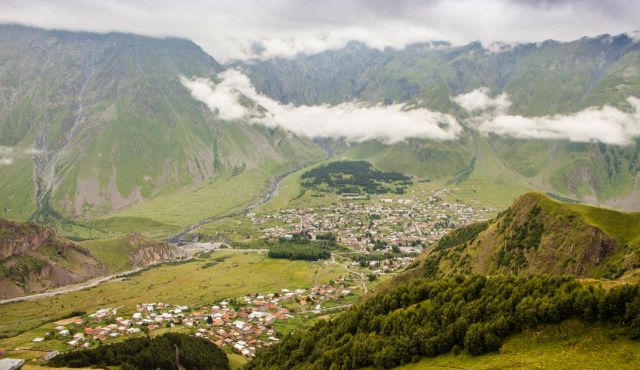 For much of the two millennia, Georgian Jews lived without anti-Semitism. From a high point of 100,000 Jews, only about 3000 remain, largely Sephardic, observant and almost all living in the capital, Tiblisi.
At the crossroads of Europe and Asia, the Republic of Georgia has been home to one of the oldest Jewish Diasporas in the world. Jews have lived in the country over 2600 years, according to sources, beginning with the Babylonian exile. The earliest archeological evidence is from the Third Century, tombstones bearing inscriptions in Hebrew and Aramaic, near Mtskheta, the ancient capital. Since then, waves of refugees arrived in the sixth Century escaping Byzantine persecution, after the Spanish Inquisition of 1492, and during the early 19th century, when the first Ashkenazim arrived, forced out of Russia.

For much of the two millennia, Georgian Jews have lived without the anti-Semitism that characterized Europe and Russia. “The Church in Georgia did not incite against the Jews, as it did in other countries”, said Gurem Batiashivili, a playwright and prominent Jewish figure in Georgia. “Also, they tended to blend in with the rural life, loved and spoke Georgian language and though they kept their own traditions, did not intermarry, they were visibly assimilated in the country. “

Some writers even claim Jewish origin to the Georgian royal lineage. King David’s harp and sling appear on the royal seal of the beloved House of Bagrationi that ruled from the early Middle Ages. Indeed, the most popular rulers of the dynasty, King David the Builder and King Tamar (a woman) had Biblical names. Jewish figures such as Abraham, Moses, and David are revered in Georgia.

None of that prevented the mass emigration of Georgian Jews when they had the opportunity to leave. Among the first “refuseniks” Jews started leaving Georgia in the 1970s with a larger wave departing in the early 1990s with the fall of Communism. From a high point of 100,000 Jews, only about 3000 remain, largely Sephardic, observant and almost all living in the capital, Tiblisi.

Tbilisi is a city of contrasts. Wide boulevards, new bridges and cutting-edge architecture exist alongside the cobblestone lanes of the old city, and the ancient fortress overlooking the capital. There are two active synagogues, Ashkenazi and the much larger Sephardic shul. It’s tribute to Georgian Jewry, with high marble columns and elaborate frescos. A minyan is held daily, and on Shabbat the congregation will bring out 100 people.

There is also a JCC, which is the focal point of a younger generation, who choose to remain in Georgia. Alexandra, quote……” Much of the support for the renewal activities, along with caring for the elderly, is from the JDC.

On one of Tbilisi’s hilltops is a Jewish cemetery, a remarkable visual testimony to the modern Georgian community. Many of the headstones bear life-size images of the deceased, some depicting their occupation or passions (music, food, cars).

At the Georgia National Museum, an outstanding design and historical collection, there was a recent exhibition about the cultural heritage of Georgian Jews. The curator, Lela Tsitsuashvili, gave us a glimpse from the archives. It is a fascinating collection of ethnography – costumes, religious artifacts, and paintings – capturing a century of Georgian Jewish life

A few hours to the west is Kutaisi, one of the most ancient cities in the world and today, the second largest in Georgia. According to legend, it is here that Jason sailed in the Argonaut to get the Golden Fleece. Perched above the city is the Gelati Monastery, which was both a spiritual center and scientific academy.

In Kutaisi, a small community of about 200 Jews gathers at a compound, site of a small and newly renovated large synagogue. Here, a minyan is held daily, often bolstered by visitors from Israel and Georgian Jews who have emigrated.

Traveling south, toward the Turkish border, and past the popular Bordoni mineral springs, we arrive at Akhaltsikhe. once a magnet for Jewish traders at the crossroads of Silk Road, linking the Ottoman Empire and Asia. Today, there are less than 10 Jews in the city, and one open synagogue. It is a beautifully designed Sephardic shul, with finely crafted ceiling, of the ubiquitous Georgian walnut trees, and a mehitzia, the divider of the women’s section, in golden hazelnut filigree. According to the caretaker, Shimon Levishvili, the torah dates back 500 years from the Sephardi exile.
Akhaltsikhe is a fascinating city, with two UNESCO world heritage landmarks – the Rehati castle and Separa monastery – and a renovated compound featuring a gleaming mosque and a stunning archeological museum. The museum collection features artifacts from archeological digs in the region, where some of the first evidence of human culture was found. The museum, a beautifully designed modern structure, containing findings from Christian, Moslem and Jewish presence in the city, an age-old display of multi-culturalism.

A visit to the Black Sea resort, Batumi, is not a must for the heritage traveler. Packed with neon-lit hotels and seaside amusements, there is a synagogue. However, it rarely is used, ignored by most who come for the seaside.

Not to be missed, however, is the breathtaking and rugged Caucasus mountain range. Kazbegi .The focal point is the Sameba monastery, majestically poised at 15,000 feet high. In the remote village of Oni, in the western range, Jews once made up about half the population. These are the descendants of the legendary mountain Jews of the Caucasus. Today, there are less than 100 Jews in Oni and one active synagogue. During the summer, the Jewish population swells with Israeli trekkers and jeep tours.

Lastly, Georgia is a hidden attraction for the food and wine traveler. Georgia lays claim to the oldest winemaking culture in the world, going back some 8000 years. The wine ageing process is unique, sealed in huge clay vessels called quevri and inserted in the ground to the neck. The entire winemaking process – initial fermentation through to maturation – takes place in these vessels. The result is bold wines, of exceptional flavor and complexity.

Food in Georgia can be a delight to the vegetarian (kosher light), with delicious breads, long and pointy called puri, baked in deep circular clay ovens. Khachapuri, the Georgian “pizza”, filled with cheese and potato is a national dish. And the ubiquitous walnut, ground into pastes, sauces and served with eggplant and other dishes.

For the meat-lover, there is shishlik. Wherever you go, there are roadside grills – literally small barbeques on the side of highways – providing smoked meats to hungry travelers. And fish, usually trout plucked from the mountain streams or farmed fresh, is another favorite.

Jewish life in Georgia, which has lasted over two millennia, is threatened not by its environment – on the contrary, Georgia regards its Jewish community with respect and appreciation. Rather, by its dwindling numbers. Emigration to Israel and the US has largely depleted its numbers. But it is safe to say that it is far too soon to write the last chapter of a legendary community in a country that wants them to stay.