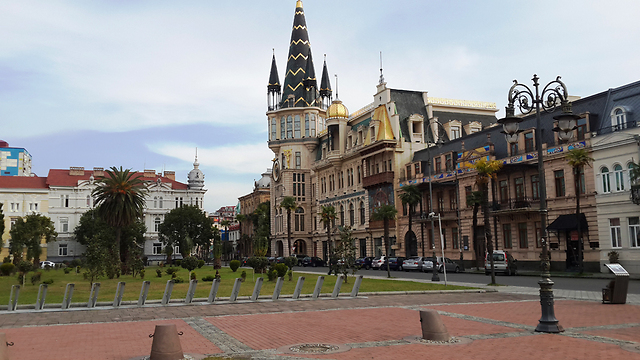 One of the most popular Israeli internet-newspaper www.ynet.co.il (2 million readers monthly) published the article on Georgia.
“You arrive to Batumi after 2 hours flight; this is one of the most beautiful towns of Georgia. Batumi is distinguished by excess of the tourists and many kilometers’ nice boulevard. Together with the traditional Georgian cuisine, you can also try European dishes in this town. Many western hotels are built in Batumi: Sheraton, Radisson Blue. Holiday Inn, Hilton and Kampinski are in preparation for the opening. Besides 5 star hotels, there are many small and beautiful hotels. If you wish to forget Palestine-Israeli conflict, visit Batumi. Many casinos and restaurants are here. Batumi port is full of fishing and transport ships. Near the port is situated an impressive love sculpture of “Ali and Nino”. It tells us a legend of the Muslim boy’s and the orthodox Christian girl’s love story. Here is also located Batumi ropeway, by means of which tourists go to the hill, from where the most beautiful view of the town opens. Population of Batumi is 150 000 persons. This is town as with old so renovated districts and modern skyscrapers. Various architectural mixture makes Batumi more attractive. Before a big trading centre is opened in Batumi you can visit various shops, where international fashion brands are presented. Batumi likes light very much. In evening this town is especially lightened. Coloured lighting makes a joyful mood.
After travel by bus we visited Gonio fortress. This is a Roman fortress with an archaeological museum built in the first century. Then we visited Keda region and spent night at “Zebo guesthouse”. We very much enjoyed by visiting the local people, tried Adjarian dishes and became familiar with local folklore.