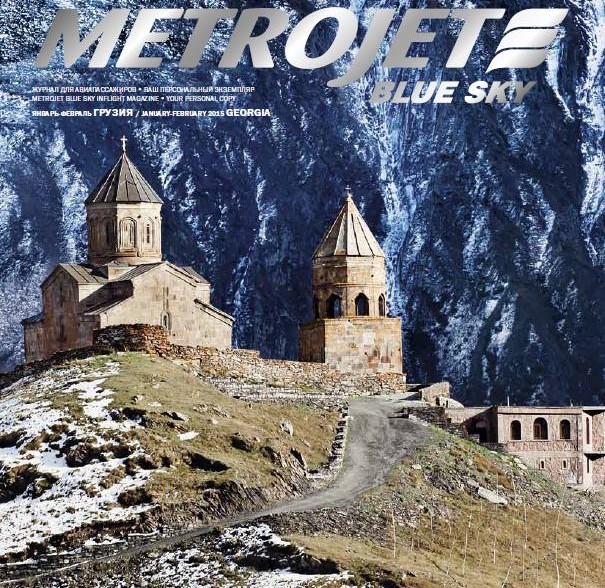 Russian airline Metrojetmagazine publishes broad article about Georgia. 26 pages of the magazine are dedicated to the tourism places of interests of Georgia. Gergeti Trinity is represented on the cover of magazine. In the beginning of the article is described the Georgian National Tourism Administration activities. Author introduces to the readers the visions of the Deputy of the Administration Tamar Chikvaidze. In the article is in detail discussed current and planned festivals, events, youth Olympics and UEFA Super Cup final in Georgia.
Metrojetmagazine pays special attention to the history of Georgia and historical districts of Tbilisi. The article talks about – tourism directions of Mtskheta, Lake of Bazaleti, Davit Gareji, Stepantsminda, Gudauri, Bakuriani, Borjomi, Mestia and Batumi. The author compares Sighnaghi with a small Italy. Separate chapter of the magazine is dedicated to the Georgian cuisine, together withnational dishes the talk is about the Georgian wine. On-boardmagazine Metrojet is published monthly; each issue has 150 thousand readers. As they state in airline Metrojet, flights in direction of Georgia are planned.