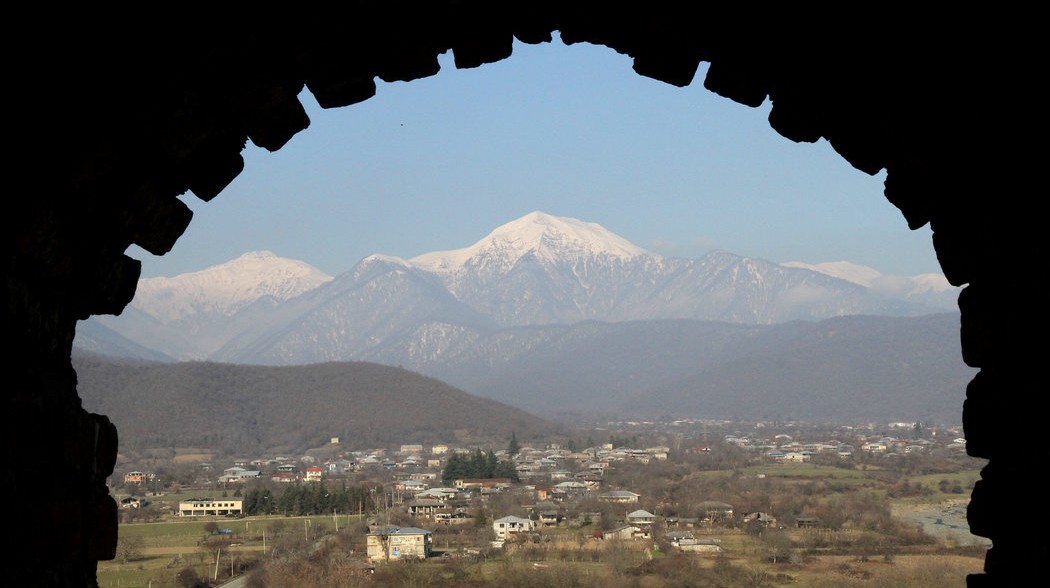 When paying so little for lodging, you can hardly complain if your host describes your homemade breakfast rather enigmatically, as Nana Kokiashvili, proprietor of Nana’s Guest House in the walled hilltop town of Sighnaghi, Georgia, did when she brought it to us: “Porridge, special stomach, maybe eat sugar, no sugar, tasting.”

For 25 lari per person per night (about $12 at 2.13 lari to the dollar) plus 10 lari for breakfast, my friend Eliza and I did not expect fluent English, let alone Nana’s warm welcome and her attractive (if rather chilly) rooms, with pleasant views of the 18th-century town high above Georgian wine country. By that second morning, her syntax-deficient English had become decipherable: “Here is your porridge, especially good for your stomach. You might want to add sugar, you might not — taste it and see.” The porridge was actually quite plain, but breakfast also included meat blintzes, fried eggs, bread with a homemade white cherry jam, and rose hip tea, well worth the cost. It would also prove to be an excellent bulwark against the day of wine tastings in the shadow of the Caucasus Mountains that lay ahead.

My visit to Georgia was in the off-season — often a great way to save, of course. But it turns out that the ancient Christian land and former Soviet republic is an amazingly cheap place to go year-round, perfect for frugal travelers who like their bumpy bus rides to end with quality meals and private rooms. With that you get the mountain villages, historic towns, centuries-old monasteries, an intriguing cuisine and lots of good, affordable wine (often less than $10 for a decent bottle on restaurant menus).

It was also incredibly cheap to get to. I flew from New York to Georgia’s capital, Tbilisi, for $493 on Ukrainian International Airlines— yes, round-trip, including taxes, checked baggage and meals. Quite a start to my first trip back as Frugal Traveler after a five-month break. (Eliza flew in from Budapest, where she lives.)

At least in winter when outdoor activities are limited, Georgia’s most notable attraction is its monasteries. Christianity came to Georgia about as early as technically possible: the first century A.D. The Georgian Orthodox Church is still a powerful institution, its patriarch is a widely revered and influential figure, its Masses are well-attended. So after pulling into Sighnaghi, in Georgia’s easternmost region of Kakheti, after a 7-lari, two-hour ride in one of the minibuses still called by the Russian term marshrutka, we took the 40-minute walk to Bodbe convent, where St. Nino, who helped convert Georgian royalty to Christianity in the fourth century, lived her last years and is buried.

As we wound around a practically deserted road, we caught a great view of the town behind us to the north, half-hidden in the clouds. To the east, lining the entire horizon like a curtain, were the hulking Greater Caucasus, shrouded in haze that left their snow-capped peaks floating like a long, wispy cloud. And we gained a companion, a butterscotch-colored dog, who darted into the woods that lined the road and back out again, never leaving us for long.

There’s a certain sadness to visiting a tourist area off-season, like roaming the hallways of a school during summer vacation; the grounds of the convent were entirely free of visitors except for us. But as we sat in the smaller of two churches there, we did seem to encounter a ghost of sorts: The door would push slightly open and then close with a bang. It turned out, however, to be the dog who had joined us, trying to nose her way in. Alas, the cathedral was closed for renovation, so we took the hundreds of steps that curved down the hill to a holy spring where St. Nino was said to have prayed; the water now flows through a spout for visitors.

We turned our attention to a dirt road that extended into the distance. A pale white nun emerged from a modest building. It was still early afternoon, so we decided on an adventure, setting off past grazing horses and pomegranate orchards with shriveled, blackened fruits.

Hitting a paved road, where we were greeted by schoolchildren, we passed a cemetery where tombstones featured photo-like images of the deceased (a first for me) and bought snacks in a grocery where the clerk rang us up on an abacus (another first). The 4 lari we spent included two hot dogs I tossed to our canine pal, who leapt, chomped and swallowed each before she hit the ground.

Sakobo was adjacent to the bigger town of Tsnori, whose streets were busy but still rather humdrum. Though the looping Georgian alphabet is as undecipherable to an American as it is beautiful, I did figure out the sign for bakery (the smell gave it away); we pressed our noses against the window, behind which a man stretched boat-shaped pieces of dough and stuck them to the inner walls of a bulbous tandoor. Before long, the man beckoned us in for a close-up look and a free hot loaf of puri, a puffy flatbread — value, half a lari.

Our dog was waiting for us when we came out, but we lost her after a stop for pork ojakhuri — a sizzling, satisfying dish of pork and potatoes — at the empty Europa restaurant, the only “real” restaurant we found in town. It was for the best; she wouldn’t have been allowed in the 7-lari cab we took back to Nana’s.

There was essentially no way to see the sites of Kakheti without hiring a driver, so we ponied up 100 lari for Nana’s husband, Zaza, to drive us the next day. “Zaza quiet man,” said Nana, and we soon found out why: He spoke zero English and would simply pull up the car in front of attractions, point in the direction we were supposed to go, and smoke as he awaited our return.

At our first stop, Zaza pointed us through the woods to the ninth-century Kvelatsminda church, notable for its unusual double domes. Its brick interior rose three stories, with light poking in through arched windows above; on the ground level, golden icons hung on the walls and tombstones were inscribed with gorgeous Georgian calligraphy. The priest or monk who opened the door for us was picture perfect, with a long, straight salt and pepper beard and flowing brown robe. As a final adorable touch, his three puppies bounded toward us as we left the church. But that was enough for dogs and churches. We wanted wine.

Zaza pointed us to what we found out later was the Numisi Wine Cellar. Though clearly unprepared for English-speaking visitors (or really, for wintertime visitors at all), they scurried and produced a woman named Natia, who spoke enough English to explain that her mother, Nunu Kardenakhlishvili, had rebuilt the 16th-century home from ruins, and turned it into a mix of informal museum and wine cellar.

She did her best to introduce us to the traditional wine preparation of the Georgians, where crushed grapes are fermented below ground in huge earthenware jugs called kvevri — though all we could see of them were depressed circles in the floor covered with a round top. A man came in and pulled off one of the tops to reveal intensely purple wine. He scooped a generous amount out into a bowl for each of us, and we drank. My evaluation was “good.” Eliza, a bit more sophisticated in such matters, found it rustic and far from subtle — the kind of wine that “can and should age.” The museum had interesting farm implements and costumes, but I liked the collection of Soviet-era shortwave radios — where the cities listed along the dial in Cyrillic (Tashkent, Kiev, Krakow) showed that listeners were restricted to broadcasts from the Soviet bloc.

A tasting in a separate room, a long hall obviously designed for large groups and their translators, cost 10 lari each and featured both reds and what is sometimes called orange wine — white wine exposed to skins for far longer, leaving it more structured and tannic. They tried to charge us an additional 50 lari total for the bowls from the kvevri — which we had assumed was part of the tour — but we negotiated that down to 20.

There were three more stops on Zaza’s marathon tour, including the much more industrial-strength Winery Khareba, where the tasting occurred inside the nearly five miles of tunnels originally drilled by the Soviet military and now used for wine storage. Then it was to the striking hilltop church and castle at Gremi, and we ended the day with a 10-lari tour of theAleksandre Chavchavadze House Museum, where its namesake, a Georgian prince, winemaker and intellectual, lived with his family in the early 19th century until his wife and children were kidnapped by a Dagestani imam. (The prince later died in a carriage accident in Tbilisi, but is buried at a nearby monastery.)

You may be wondering why I haven’t yet mentioned food, given Georgian cuisine’s great reputation. The truth is that after a few days I was finding its skillfully grilled meats, baked-to-order acharuli khachapuri (a boat-shaped bread filled with cheese and topped with a raw egg), and hefty dumplings a bit heavy. Looking for something different, we tried the town’s most celebrated restaurant,Pheasant’s Tears, which I assumed would be too expensive. Silly me, I was in Georgia.

In the casually elegant (and empty) dining room, our waiter explained that the menu varied by day, depending on what was available at local markets. Dishes were often modernized takes on traditional Georgian foods. Normally, I would have balked at the clichés, but after too many heavy meals I was delighted; I was also utterly unsurprised to hear he had polished his excellent English in Brooklyn.

The chef, Gia Rokashvili, prepared us amazing samosas filled with spinach, chickpeas and mushrooms alongside a dipping sauce of water buffalo yogurt and pomegranate, a soup of tender beef rib, and refined takes on traditional pkahli, vegetable and walnut mashes usually served in colorful little balls. (He laced the pumpkin version with ginger, for example.)

With wine, the bill for two came to 62 lari, or $30, for the kind of meal that would easily break $100 in many places. We were delighted, and, realizing Pheasant’s Tears is a winery first, restaurant second, asked to tour its closest vineyard, in the nearby village of Tibaani. The next morning, Gia himself was our guide for the 25-lari tour, stressing that their process is all-organic, and they still ferment their wine exclusively in beeswax-lined kvevri, as Georgians have for at least 8,000 years. (Pheasant’s Tears, I would find out later, was founded by an American artist, John Wurdeman, and has gained a worldwide reputation among aficionados of natural wine.)

Gia also showed us the wild greens he forages for the restaurant. He surprised us by telling us he had no formal culinary training and had never worked outside Georgia before the restaurant gained an outsized reputation. “My cooking comes from inside, it’s spiritual,” he said. “I learned from my family. I never liked cooking schools.”

Then the chef finished our personal tour, chauffeured us back to the restaurant and whipped up a sumptuous lunch just for us, his only customers. Not a sentence you read often in this column, but that’s (off-season) Georgia.